Home › School › An Unlimited Vision: An Interview with Henry Elkus

An Unlimited Vision: An Interview with Henry Elkus

Henry Elkus, a current senior at the OHS, embodies many of the traits that make OHS and its students stand out among other schools. He is not only a dedicated student and a talented ski racer, but also a promising entrepreneur.

“Skiing, learning, philanthropy, and clothing are my passions right now. I frankly didn’t care how pursuing all of these unique fields would affect my calendar — I wanted to pursue them all at the highest possible level.” 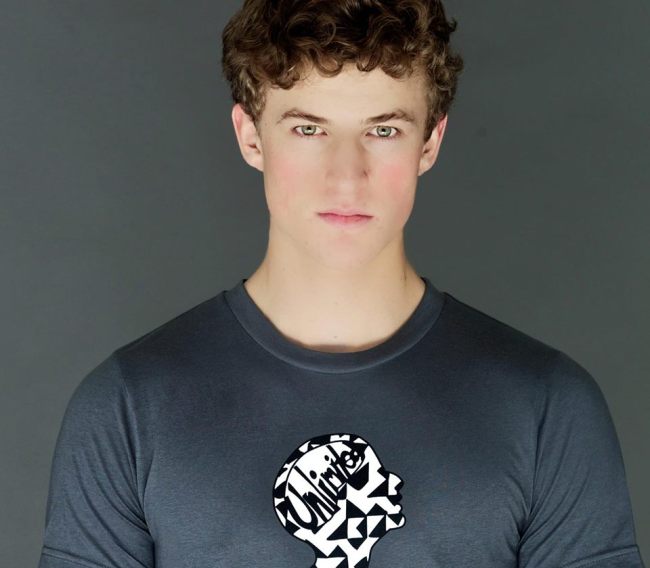 Elkus is the chief operating officer of Unlimited Ltd., a graphic arts clothing company he founded along with Devan Sood, a friend of Elkus. The company produces their apparel by crowd-sourcing designs from teenage artists across the country. Unlimited Ltd. began as a small company without any marketing or investment, catering only to the founders’ core group of friends. However, Elkus and Sood quickly found that their designs, described as “sassy and powerful” were catching the eyes of many not just due to their outward appearance but the deeper meanings behind them. Their first line, a play-off of cold-war era censorship, sold out almost immediately.

“It was immediately clear we had something a little different than everyone else,” said Elkus.

The founders’ aspirations began to grow as they focused on using their unique business model to tap into an underutilized market. The graphic design clothing industry was dominated by websites that allowed people to place their own designs on clothing or purchase pre-made ones; however, clothing was often made of low-quality material. On the contrary, Unlimited Ltd. decided to build its business around combining the graphic designs common to street style with the high quality fabrics used by brands such as Versace and Gucci, but at a price affordable to teenagers. By tapping into the talents of young artists, Elkus and Sood could acquire designs on par with those of acclaimed professional artists while bringing their fellow teens opportunities to share their art. Their connections to the wholesale fabric industry allowed them to use these high-quality, extraordinarily soft fabrics while keeping prices at $20 rather than $150.

The two teens then expanded their company by utilizing a method that our generation knows best: social media. Unlimited Ltd. took to Facebook. By conducting photo shoots every few months, Unlimited Ltd. provided teens with high-quality profile pictures, which garnered likes. This method gave the clothing and designs more exposure, and soon the company had a much larger following. (Unlimited Ltd. has 2,500 likes on their Facebook page as of today). Thomas Nielsen, former OHS Student Body President, joined the team next to help expand their presence on the eastern seaboard.

“Although we now use professional models and photographers, the feel of the company is exactly the same: grassroots and gritty” states Elkus.

Elkus and Sood are dedicated to remaining true to the demographic that allowed them to begun: teens that want the quality of high fashion but lean more towards the designs of casual wear. Their ads target this demographic, and they make sure the brand conducts itself in a way that caters to this audience. Besides using Facebook, Unlimited Ltd. also has a strong presence on Tumblr, Instagram, and Twitter. The founders make sure to attend events that will have a high percentage of “on-brand” buyers as well and have even gained promotions from Chloe Mortez, Camryn, Mackenzie Drazen, and Deepak Chopra.

Despite Unlimited Ltd.’s ability to expand quickly, they have emphasized quality over quantity. “Often times, Devan and I will strike down design ideas or partnerships that might be profitable but don’t reflect the company’s values. For example, we rejected a plan to expand to South Korea and China because the mass production required to sell in those markets would have forced us to print on cheaper fabrics. Before Unlimited reaches those regions, we want to have the influence required for us to do it our way, not someone else’s,” said Elkus.

The company is not just dedicated to mixing street art with the quality of high-fashion, but also expands their vision to incorporate humanitarian efforts. Elkus took on a partnership with Aid Still Required, one of the few charities that actually goes into Haiti’s shantytowns, where violent crimes are commonplace, water sources are mixed with trash, and electricity sources are lacking. Unlimited Ltd. donates an article of clothing to Haiti for every sale it makes, but also seeks to help the areas in a more significant way. The company has laid the groundwork to begin influencing the local economy by encouraging entrepreneurship. The goal is to send printing machines for clothing directly into the shantytowns, allowing both production and sales to happen internally in the area. This will allow for implantation of money into the economy and will also prevent violence by providing the people with jobs and a purpose. The profit will not leave the shantytown.

According to Elkus, “one thing that I learned from studying the most successful companies is that a successful business must exhibit a trait of influence, not just one of profit.”

Unlimited also has domestic charity efforts. Growing up in Los Angeles, the founders were no strangers seeing the impacts of homelessness. Aiming to impact the lives of the Los Angeles homeless, the company also donates formal clothing to the homeless to help maximize their chances of finding a job.

However, as always is in business, it was not an easy road to achieve success. As teenagers, they faced unique challenges in balancing school, extracurricular activities, and running Unlimited. Elkus states that he could often be found reading philosophy for his afternoon classes at six in the morning over breakfast, while on hold with a market team from across the country. Despite these time management and balancing challenges, the duo also faced having to become well-versed in corporate law. The clothing business is cutthroat and the laws are ambiguous and after several instances where the company’s design concepts were stolen, the two men had to quickly learn the ins-and-outs of intellectual property law, a not so basic concept to grasp, especially without any background in law. Elkus cites that he spent time scouring dense 500-page files trying to find the information needed because they could not afford a lawyer.  They were able to become knowledgeable enough to defend themselves in two lawsuits and settle for profit in both. They also had to strategically draft contracts because, while Elkus and Nielsen are of age, Sood and many of their models and artists are not.

“In the beginning, it was a lot of chaos. Now, things are meticulously set up. We have folders and folders of concept art, as well as a team of artists that we can count on to draw for us. As far as administrative tasks, there are now enough people on board that the smaller jobs can be handled so that Devan, Thomas, and I can work on bigger picture ideas” stated Elkus.

Elkus is continuing to pursue his other interests even with Unlimited taking off. He originally came to the OHS so he could pursue a career in ski racing full time, requiring that he train in many different locations throughout the year. However, he did not want to let go of receiving a quality education and found that the OHS allowed him to pursue academics at the highest level possible while also providing the flexibility needed to dedicate time to a high-level sports career. The geographical and temporal freedom of the OHS has allowed him to travel for his ski racing as well as for trade shows, photo shoots, and business meetings for Unlimited.

“The OHS exceeded my already high expectations by providing an undergraduate level education that constantly challenged and brought the best out of me. The teachers here are immensely qualified and never compromise. Stanford allowed me to take the incessant vigor that I had for education and skiing and also place it into my business,” he said.

As far as future goals, Elkus plans to continue to ski race at a high level, become a successful NCAA athlete, continue to expand Unlimited Ltd. worldwide while retaining its core principles, and also further his domestic and Haitian charity partnerships. He has been able to find a way to influence the manner in which others express themselves while also immersing himself in something new, scary, and risky. When asked what advice he had for OHS students and aspiring entrepreneurs, Elkus concluded with this: “Be comfortable with falling flat on your face. Provided you put forth your best effort, a failure is infinitely better than being stagnant. Find an idea that is protectable, unique, and make sure you are ready to do anything to make it work.”