OK Go and Why This Is the Future of Music

There’s a lot to say about OK Go: they’re exciting, fun, and most importantly, the leaders in a new movement in the music industry. With three official albums published (two with Capitol Records and their most recent published independently), this band has shown their versatility and diversity in sound. From the intense, fast paced Invincible to the slower, more melancholy Last Leaf, there’s no style that OK Go can’t employ. I could go on and on about the brilliance of their songs and style, of which I certainly will do at least a little. However, an entire article praising only their particular flair wouldn’t tell you exactly why I look up to OK Go as one of the best bands of our era. Towards the end of this article, I want to discuss their recent startup company Paracadute, which they lovingly describe as a “21st century Maker of Creative Things.” In particular, I’ll try to show you why I’m betting more companies like Paracadute will pop up soon, and why these companies will quickly transform how we think about art distribution. 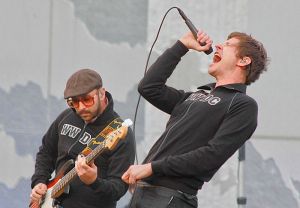 The best way to look at OK Go is in chronological order. So, let’s start where it all began – their flagship album OK Go. At first glance, their debut appears to be a stereotypical rock album: a couple of fast songs at the beginning followed by a series of slower, relaxed songs towards the end. Songs like “Get Over It” and “Don’t Ask Me” are staple rock songs, complete with strong beat, gritty guitar and angry lyrics. Later, we find slower, more melancholy songs like “Shortly Before the End” and “There’s a Fire” as usual for a rock album. However, look deeper into each of their songs. Each one has its own or quirks that distinguish it from a traditional rock song. Whether OK Go chooses to use a strange instrument, like organ or synth-guitar, manipulate voices beyond recognition, or offer up oddly intellectual lyrics, they always seem to sneak an odd facet into each piece. Why not go all-out with the indie-style music, though, and emphasize rather than hide the oddities in their musical style? My theory, based on what has come since, is that their record company, Capitol Records, wanted music that would appeal to the largest common denominator rather than allow them to publish the music that they really wanted to make. There’s nothing wrong with this (the record company needs to be profitable after all) but it limited the amount of oddness OK Go was allowed to insert into any given song. Overall, this made their flagship album a great rock album that hinted at the future greatness they could achieve away from their major record label, but wasn’t revolutionary in and of itself.

On their second album, Oh No, OK Go once again produced a strong collection of rock songs that sounded perfectly fine, but lacked the spontaneity and creativity of which they were capable. Songs like “Invincible” and “Here it Goes Again” are fast-paced and fun, but are unfortunately constrained to the typical rock-song formula. These songs have the potential to be incredibly original and brilliant songs, but once again they feel inhibited and lack the spontaneity that OK Go will later prove they possess. That isn’t to say this album doesn’t have its gems – pieces like “Television, Television” and “Maybe, This Time” are brilliant compositions that demonstrate their versatility and ability.

Finally, we reach the third and latest album from OK Go, Of the Blue Colour of the Sky. This was the first album they released after breaking away from their major record label. On this album, OK Go was finally able to make full use of the creativity bottled up on the first two albums. All of the songs in this album stray from their generic rock-song formula, and with each piece they explore new genres and sounds and styles. Of the Blue Colour of the Sky has no one prevailing sound: experimental, slow songs like “Skyscrapers” and “Before the Earth Was Round” differ wildly from their well-known fun songs like “White Knuckles” and “End Love.” This is my personal favorite album, not only because it has the best songs, but also because you can tell that they were finally allowed to break away from the formula and make the music that they wanted to create rather than the music that their label wanted them to make. Listeners can tell the difference between the two eras of OK Go. Once they could make music for the audience they wanted to appeal to rather than the audience the record label wanted to appeal to, they could really flourish. Record labels still have a place in our culture; they provide significant aid to new bands and help popularize groups that otherwise might remain underground. However, for bands like OK Go that have a specialized sound, a record label can become a hindrance, and prevent them from living up to their true potential. Thus, I expect more people to break away from their labels in the future. As bands realize that they can make better content away from the normalizing force of a major label, a proportional number of indie bands should form their own creative companies like Paracadute.