Home › Arts & Culture › Dogs are Not Allowed in the Dog Park

Dogs are Not Allowed in the Dog Park

Sometimes, all we need is a break from reality and the ability to immerse ourselves in something eerie and impossible. Welcome to Night Vale, a free podcast created by Commonplace Books, takes unnatural a step further. Nothing is normal in Night Vale, “a friendly desert community where the sun is hot, the moon is beautiful, and mysterious lights pass overhead while we all pretend to sleep” (Episode 1). Led by the newscaster Cecil, Welcome to Night Vale takes listeners through daily newscasts of a fictional town where the abnormal is simply part of everyday life.

The story begins with the opening of a new dog park, for hooded figures, and the arrival of a scientist named Carlos. As time passes, Night Vale gains new citizens, and listeners meet some of the old residents. Notable mentions include the Apache Tracker, “that white guy who wears the huge and cartoonishly inaccurate Indian headdress”; John Peters (you know, the farmer); and Dana, the Station assistant (Episode 2). Some characters appear to be normal, at first, while others immediately reveal themselves as strange and unnatural. Angels make an appearance, as well as an unnatural floating cat, named Khoshekh. 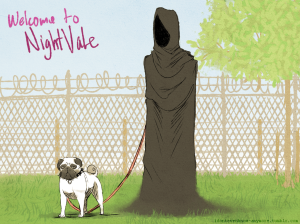 Welcome to Night Vale also teaches important life lessons. Examples of these include, “Men are from Mars, women are from Venus. Earth is a hallucination, pod casts are dreams”; “Guns don’t kill people, we are all immortal souls living temporarily in shelters of earth and meat”; and “Regret nothing, until it is too late. Then, regret everything” (Episodes 2, 25, and 10). Listeners may also find out why “dogs are not allowed in the dog park”, why they should vote Faceless-Old-Woman as Mayor, and why they should fear Street Cleaning Day (Episode 1). From the very beginning, Cecil takes listeners into the very heart of Night Vale. He is indifferent to the nonsensicalness, to the point where nothing truly fazes him…except perhaps Carlos, the scientist. Through Desert Bluffs and dragons, dating and death, Cecil guides listeners as though they are a part of the town itself.

There are new episodes of Welcome to Night Vale twice each month, and each time the seemingly nonsensical plot grows, as new characters are introduced and the town becomes even stranger, though that may not seem possible to new listeners. Currently there are 31 episodes, each between 20 and 30 minutes long. Each episode has a “weather” section part of the way through, with songs by aspiring musicians. While it may appear like Welcome to Night Vale is plot-less, there is, surprisingly, a veiled plot, and episodes should probably be listened to in order. There are also subplots that reoccur during the series, such as what precisely is going on with the Night Vale Public Library, and impossible physics, such as a house that doesn’t exist and earthquakes nobody can feel. Trivial details wind together to create a strange, nearly nonsensical story.

Welcome to Night Vale creates a strange world where listeners attempt to make sense of a culture without logic. It’s mostly a science-fiction work, though it still retains a hint of fantasy, with dragons and large masked armies appearing throughout the story. Perhaps while unwinding from homework or fulfilling gym requirements it might be a good idea to pop in some headphones and allow yourself to discover the wonderful city of Night Vale. In the words of Cecil, “Good night, listeners, goodnight.”

‹ Time Management: Balancing the OHS and Extracurriculars
Much Ado About Gluten ›