If you had to choose anyone to represent the entire human race, Gary King is not the person you would choose. In fact, in the new movie The World’s End, it’s hard to find a person less suited to convey a good impression about the future of humanity than King. In a nutshell, Gary King is a middle-aged failure who can’t get his head out of his glorious high school days. Back then, Gary King and his posse of four best friends were superstars, all ready to take on the world. As school life ended and everyone prepared to move on in life, these 5 Musketeers embarked on a quest that would be the crown jewel of their adolescence: a pub crawl called The Golden Mile. 12 consecutive pubs and 12 consecutive pints all in one night, culminating in one final drink at the pub named The World’s End. However, in these glory days, King and his crew never finished the pub crawl, and only made it midway before giving up. Ever since that day, King has been caught in his days as a youth, and he still has the maturity of a pubescent teen at age 40, even as the rest of his friends have grown up to be successes in their own fields. Now, in order to prove that the age of Gary King has not waned, he’s finding all his high school buddies again to finish The Mile once and for all. However, even though King has set out to conquer the world, in the end, he must choose to save it… or not. 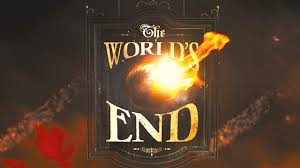 The World’s End is the hilarious third installment in the unofficial Three Flavors Cornetto Trilogy, and the third movie to come from the minds of director Edgar Wright, also known for Scott Pilgrim vs. the World, and actor/writer Simon Pegg, who also played Scotty in the new Star Trek movies and gearhead Benji in the latest Mission: Impossible. Also starring in the movie are well known actors Martin Freeman, known for his role as Watson in the BBC television show Sherlock and Arthur Dent in The Hitchhiker’s Guide to the Galaxy, and Nick Frost from Snow White and the Huntsman and from Paul. At its core, The World’s End is the story of a man-child who has lost his way, and is desperately trying to figure out how and where he lost it. In a sense, The World’s End is breaking new ground as the coming-of-age story of a 40-year-old.
The World’s End takes the genius blend of situational humor, dialogue, and slapstick comedy that was typical of the other two movies in the Cornetto Trilogy, Shaun of the Dead and Hot Fuzz, and pushes it further than ever before, resulting in a unique hilarity that keeps viewers laughing through the entire movie. Combined with the thrilling (yet entertaining and funny) fight scenes sprinkled throughout the story that resemble those in Scott Pilgrim vs. the World, the movie grips the audience until the very last second. One word of warning, the movie does use a fair amount of profane language (and obviously drinking), which may not be suited to every audience. However, if you’re looking for a highly entertaining movie with a solid plot and reliable actors, catch The World’s End while it’s still in theaters.

‹ Welcome to the Oracle!
Arabian Nightmare. ›