As a result of deadly labor conditions, irresponsible management, and non-existent regulation, 112 workers lost their lives on November 24, 2012 making clothes for Wal-Mart in a garment factory in Bangladesh.   More than a year before the Tazreen factory burned to the ground, an audit revealed serious safety hazards.  The inspection, carried out by a Wal-Mart supplier, found that exits and stairwells were blocked, workers had no idea how to evacuate, and the firefighting equipment was insufficient.   Not only did Wal-Mart ignore this report indicating that the Tazreen factory was brimming with fire hazards, but management also specifically decided not to increase safety measures, in order to insure that profits wouldn’t take a hit.   At a cost of about 10 cents per garment, Wal-Mart could upgrade each one of the 4,500 garment factories in Bangladesh to suitable safety standards.   Considering the fact that Wal-Mart profits in 2011 topped $15.7 billion, a dime seems like a small price to pay in order to guarantee the safety of the workers. 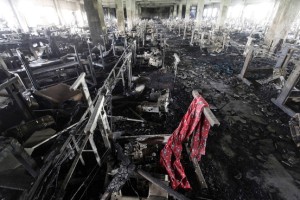 According to the retailer, all business with the Tazreen factory had been cut off long before the fire, and a supplier must have continued making clothes there without approval.  How does a supplier use a factory without the retailer’s authorization? Instead of blaming suppliers for the results of negligent management, Wal-Mart should be focused on insuring proper compensation for the families of the workers, and on preventing disasters like this in the future.

The Wal-Mart empire has formulated a different strategy.  Wal-Mart is not only the largest buyer from Bangladesh, its annual revenues of 2012 ($447 billion) are almost four times the gross domestic product of Bangladesh ($118 billion).  The foreign super-power is asserting its control by squeezing wages and suppressing any attempts by workers to improve safety conditions.   This inhumane behavior has sparked a revolution that could overthrow the Wal-Mart monarchy in Bangladesh.  Mass protests of up to 15,000 demonstrators filled the streets immediately following the Tazreen fire, demanding government action against those who disregard fire safety precautions in factories.   However, big brands like Wal-Mart are legally protected, even though there are not laws to protect the factory workers.

While the controversy surrounding the Wal-Mart fire will fade over time, worker conditions will not improve unless we take action now.  The Tazreen incident should be a fire alarm to awaken us from our blind and indifferent daze.   Workers in Bangladesh are being oppressed and threatened by one of our own companies, one that claims to represent everything American.  Since when did negligence and irresponsibility become American qualities?  There are actions which nature can’t forgive, and Wal-Mart has committed the worst of these.  If you can still walk into a Wal-Mart and buy a pair of $8 jeans, then the blood no longer stains Wal-Mart’s hands, but yours as well.  Let’s put a stop the bloodshed.  Wal-Mart Shoppers of the World, Unite in Support of the Wal-Mart Workers!