On the Ground at the South Korean Special Olympics 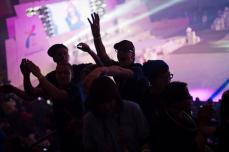 The 2013 SO World Winter Games emphasized the themes of unity, friendship, and unrelenting determination as opposed to individual success. These themes were portrayed throughout the Games in many different ways, such as the motto for the games, “Together We Can,” and the unique judging procedures.

All of the delegations were able to participate in Host Town Programs around Korea that allowed the athletes to experience and taste the Korean culture before the competitions begin. Some activities included playing traditional Korean instruments, trying Korean cuisine such as the Bibimbap stir fry, and wearing brightly colored traditional garments called “hanbok.”

The official start of the 2013 Special Olympics was on January 29th at the Opening Ceremony at the Yongpyeong Dome. Many distinguished guests such as the former president of South Korea, Kim Yuna, and Yao Ming, attended the ceremony, increasing the need for security and safety precaution. The Dome itself had transformed from an ordinary ice-rink to a beautiful stage on which the ceremony took place.

Showcasing some of Korea’s finest arts, such as the customary dance style called Namsadang, the Opening Ceremonies, in the words of Belgium’s Head of Delegation, “beautifully portrayed the Korean culture, however some aspects of the program were too difficult and serious for the athletes to fully understand and enjoy.” Many critics of the Special Olympics complain that the ceremony wasn’t organized with the athletes in mind, including too many politically related speeches that took away from the celebration of the event’s official beginning. The games started early the next day. Athletes described the start of the games as “exciting” and “a good opportunity to showcase skills.”

The following days of competition brought many athletes stories of victory, success, and perseverance. More importantly, the athletes were also able create life-lasting friendships with athletes of different delegations, and the Delegation Assistance Liaison volunteers whom they worked with every day. As Jean-luc Wathieu, a Belgian gold medalist in snowboarding said to his DAL volunteer, “I’m very happy to have won, but I’m even happier that you were able to share these memories of happiness with me.”

A unique aspect of the Special Olympics is its award ceremonies. Unlike the Olympics, each division has its own award ceremony, allowing all the athletes to win a gold, silver, or bronze medal or a participation ribbon.

On February fifth, the 2013 PyeongChang Special Olympics officially ended with the Closing Ceremony. It proved to be an emotional event, where athletes, coaches, and volunteers celebrated their time together with dancing and tears. It was described as a bittersweet moment when the Special Olympics flag was taken down and passed on to the next chairman of the 2015 Los Angeles Special Olympics.  After the speeches and official presentations were finished, the Yongpyeong Dome became an boulevard of celebration of the human spirit. “It’s remarkable how in the beginning, we were all strangers,” said Axel, a coach for the Belgian cross country ski team. “The language barriers and barriers between people with disabilities and without seemed too great to overcome. But now, here we are, in the place where it started, as one unit, as one Special Olympic family!”

‹ The Oracle–Lectures and Meetups
Views of an OHS Life #1 ›